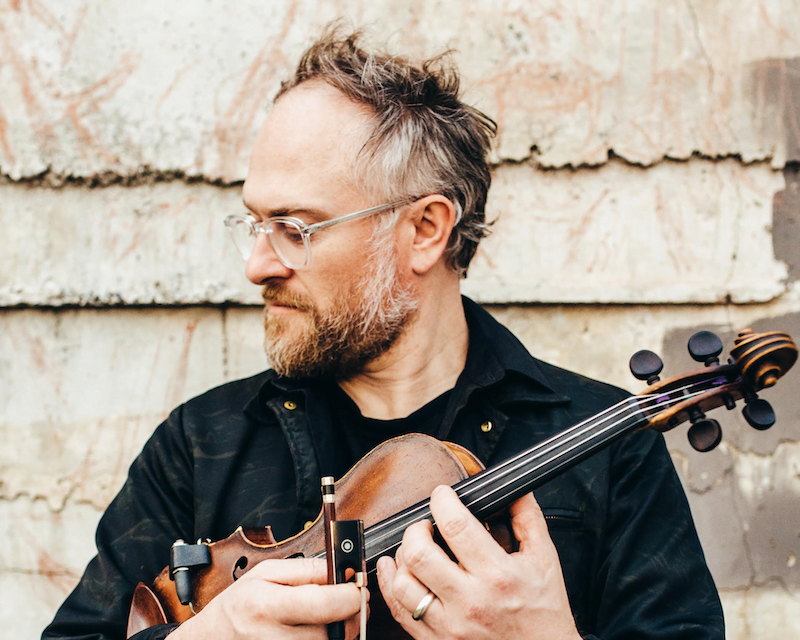 My name is Jesse Zubot. I have been a professional musician for approximately 25 years now. I started learning music at a very young age studying classical music on the violin, then playing in cover bands with my father and rock bands with my friends as a teenager. I spent my early years playing around on many different instruments although guitar and violin was where my focus was based. I then moved onto studying jazz music through Capilano College (now Capilano University) during the early 90s. After this I started touring and later in the 90s had a group called ‘Zubot & Dawson’ where we performed original folk based acoustic instrumental music. An extension on this group was a project called ‘Great Uncles of the Revolution’ including renowned Toronto musicians Andrew Downing (bass), Kevin Turcotte (trumpet) as well as my Vancouver colleague Steve Dawson. These projects help launch my career into many different realms and from there I started working with more jazz (free-jazz) orientated projects, improvisational outfits and experimental music. I delved heavily into Vancouver’s underground and improvisational music scenes with the likes of Fond of Tigers, Peggy Lee, Tony Wilson, Francois Houle, JP Carter, Skye Brooks, Gord Grdina, Kenton Loewen, Dylan van der Schyff and many others. During this time I also toured as a backup musician with more mainstream singer songwriter artists such as Hawksley Workman and Dan Mangan. In the past decade and a bit I have worked extensively with Polaris Prize winning Inuit throat singer Tanya Tagaq and have ventured into becoming a producer in the recording studio for many album projects and also have a busy career as a film composer. I am a multi Juno Award and Western Canadian Award winning artist/producer as well as multiple Canadian Screen Award nominee for film scoring.

My musical palette stretches wide. I like to dabble and take influence from all sorts of places: folk, blues, electronic, new music, improvisational, rock, experimental, jazz and so on. My music can not really be described with a specific label. Different projects I am involved in tend to focus on different combos of styles here and there. The improvisational aspect of jazz, however, has a large influence and does come into play in most music that I create.

The latest recording I’d like to promote is called ‘Songs of Tales’. The new album is called ‘Life is a Gong Show’ and comes out May 1st, 2020. This recording is led by Petr Cancura (Saxophones) from Ottawa. Petr is the current programming director for the TD Ottawa Jazz Festival. The band also includes my good friends Jean Martin (drums and electronics) from Toronto and local powerhouse Gord Grdina on guitar. This is a collaborative effort between the four of us and incorporates simple song structure meshed with jazz improvisational sensibility, experimentalism, rock beats, blues spice and soundscapes.

At this point people can pre order the album (CD) from Roots 2 Boot record label from this link.

The album will then be available from your regular digital download locations such as Spotify, iTunes and such after May 1st.

I have been very busy working with many different artists in the last few years and most of my recent recordings have recently been collaborative.

I am part of Gord Grdina’s new ‘Septet’ project that just released the album ‘Resist’. It is released on New York saxophone player Jon Irabagon’s label and involves many great local musicians as well as Eyvind Kang on viola! You can purchase it here.

Another new release I worked on extensively, is by musician Jay Crocker (now based out of Nova Scotia). He has a project called JOYFULTALK and I performed all the strings for the recent album. This album is kind of electronic based and and includes Minimalism, Japanese environmental music, Maghrebian rhythmic modes and other numinous folkways. We were slated to perform at the 2020 Vancouver International Jazz Festival until it was cancelled.

JOYFULTALK is available from celebrated Montreal record label Constellation Records and you can get it here.

In the last decade I have worked very closely with Inuit throat singer Tanya Tagaq. I produced her last two full-length albums and am quite proud of them. The last one, entitled ‘Retribution’ is a real epic journey you may want to check out and includes myself on violin, viola, electronics and production along with Jean Martin (my drummer buddy) from ‘Songs of Tales’. You can purchase it here.

I would like to give a shout out to Mr. Kenton Loewen. Kenton and I (production mode) are currently working on his upcoming singer-songwriter album that will be available later this year. He is an amazing drummer that I have worked with throughout the years in many different combos and groups. He is a great improvisational drummer and co runs the 8EAST space in Chinatown with some other folks. Kenton is also a great songwriter, guitarist and singer and I am real excited to finish up his album and to have people hear it.