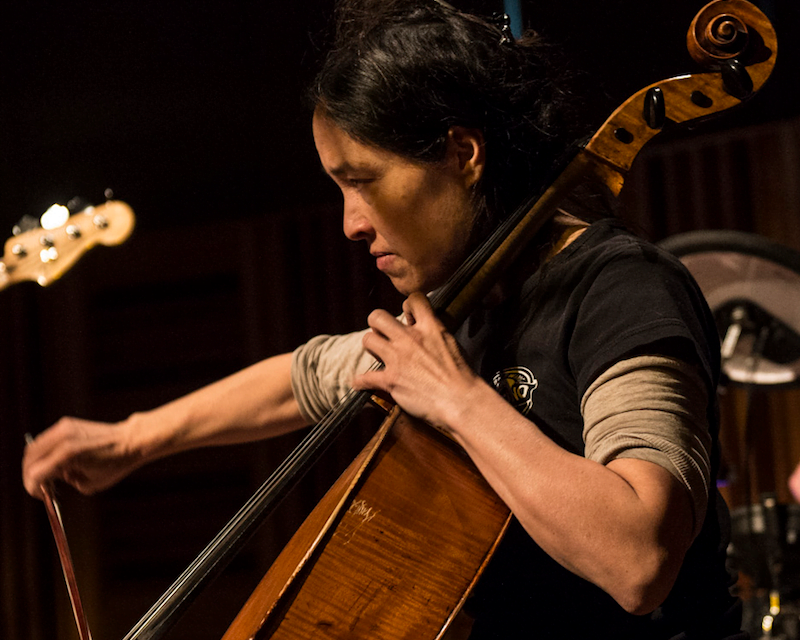 I am a cellist/improvisor/composer who has resided and performed in Vancouver since 1989, but I am currently in Melbourne, Australia where I landed on March 11 of this year to join my husband, Dylan van der Schyff. Dylan took up a teaching position at the University of Melbourne in February.

I was planning to return to Vancouver in June to take part in the Jazz Festival and various other performances and projects but, with so many live events being cancelled, my return date is now up in the air.

The music that I write for various groups incorporates improvisation and is influenced by all of the music that has touched me from classical to folk, new music, pop and jazz. I enjoy hearing abstract sounds rub up against melodic sweetness and I would say that there is a cinematic feel to the music.

The band that I was going to bring to the Jazz Festival this year is the Peggy Lee Band and we were going to be performing a set of brand new compositions, as yet unrecorded. Our most recent release is from 2012 and it is called Invitation (Drip Audio). It is available from my bandcamp site.

In addition to this recording, I’d like to mention two more recent releases: Telltale (Drip Audio, 2016) with the group “Film In Music” and my latest release which is called Echo Painting (Songlines, 2018), both of which are available on my bandcamp site.

I have had the good fortune to work with so many wonderful musicians on the Vancouver scene over the years and it’s very hard to mention just one. But this coming weekend the Jazz Ahead meeting in Bremen was scheduled to take place and I was supposed to be performing there with Josh Zubot’s string group so Josh’s fantastic music and stellar cast (Jesse Zubot, Meredith Bates and James Meger) are on the mind!

A note: on May 1, Bandcamp is waiving their percentage of all purchases so that the money goes directly to artists. Any day is a good day to buy one of Peggy’s records, but we suggest purchasing on May 1 to maximize the impact of your purchase.