To celebrate his live-to-tape Frankie’s Jazz Club performance, we spoke with Itamar Erez about about touring, the best musical advice he’s ever received, and teaching on Zoom! 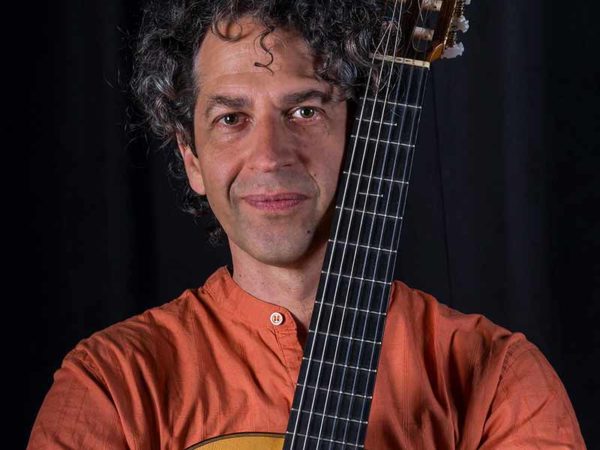 What has music-making looked like for you during the pandemic? Has anything changed about your personal practice?

Since the pandemic I’ve been more active online. Apart from the Vancouver Jazz Fest live streaming I did recently with my trio (thanks to everyone at Coastal for this!), I also played a live streaming duet show from my studio (with Kevin Romain on drums) for the TD Niagara Falls Festival, and even did one ‘real’ gig with my quartet at the Firehall Arts Centre in September which was a lot of fun!

I have just completed writing a piece for ‘Sound Of Dragon Ensemble’ (which I’m also part of) and I’m very curious to hear how it sounds. It’s written for 8 instruments, including traditional Chinese instruments such as the Erhu, Ruan, Dizi, ad well as flute, guitar, cello and percussion.

Teaching has been interesting—online teaching on Zoom now opened up the possibility of teaching students from around the world, which has been very gratifying.

What have you been listening to lately?

Most recently I have been listening to different interpretations of one of my favourite songs, ‘Answer Me, My Love’. I have known Joni Mitchell’s version of it from the ‘Both Sides Now’ album, with the incredible orchestral arrangements of Vince Mendoza. But I just discovered Keith Jarrett’s version of that song  from the newly released album ‘Live from Budapest’. Keith’s version is especially heartbreaking in light of the news of his stroke and the fact that he may never play the piano again…

Also discovering the music of Dan Tepfer (watching his live Facebook performances) has been great, as well as the music of NYC based saxophonist and composer Mark Turner.

Other than music, is there anything you’ve been doing in your day-to-day life during the pandemic that’s been fulfilling to you?

Being with my family has been really special as well as talking to my family abroad on Zoom during this intense time. I have also started practicing Movement Flow which is a unique movement practice here in Vancouver.

Who are some of your favourite BC musicians?

First of all the musicians I collaborate with regularly here in Vancouver—I’ve been lucky to play with such amazingly creative and open minded people as François Houle, James Meger, Kevin Romain and Jeff Gammon.

Apart from that, I am a big fan of Peggy Lee’s music, and of musicians such as (Peggy’s husband) Dylan Van der Schyff and Tony Wilson. There are so many good musicians here!

When the pandemic is over, what’s the venue you’re most excited to return to playing in?

I’m excited to go back to touring, playing in Europe again would be amazing! I toured there exactly a year ago and it feels like such a long time ago. I’m being hopeful… Also playing last year at Performance Works during the jazz festival—would love to play there again!

What’s the best musical advice you’ve ever been given?

This special pre-recorded live performance was available for two weeks after its stream date. It is now available to donors above $50 as part of our performance archive. If you are interested in seeing it and have the means to support us through this difficult period, please make a donation.