I’m a music nerd—a pretty big one. One of the things I love to think and talk about is how I first found out about an artist, and what other music that led me to—particularly when it originated from a recommendation by someone I know. So that’s what instantly came to mind recently when talking about Jeff Parker’s upcoming streaming concert premiering June 28th as part of the 2021 TD Vancouver International Jazz Festival.

Quite a few years ago—I’m going to say 15ish—Geoff Hicks (Vancouver drummer, fellow music nerd, mensch) recommended that I check out the band Tortoise. I had heard a bit about them over the years but hadn’t yet listened to any of their music. I trust Geoff’s taste, so I went out and got their (at the time) recent album “It’s All Around You”. I loved it. They were and are great musicians who incorporate jazz, electronics, minimalism, and krautrock into their instrumental rock. Then, as I do, I bought all of their albums, and proceeded on to other projects by their various band members. The ones that I particularly loved were bassist/guitarist Doug McCombs’ band Brokeback and all the many different projects of guitarist Jeff Parker, Tortoise’s “jazz” musician.

Jeff Parker’s playing is always interesting, sometimes even surprising, but never flashy or unnecessarily showy. He has a unique voice on his instrument, which is even more impressive considering how ubiquitous the guitar is in almost all modern music. Parker has participated in many different projects, so there was a lot for me to nerd-out on. I got into the bands Isotope 217 and Chicago Underground, his various solo records, and sideman gigs on great records by Scott Amendola, Brain Blade and many others. I’ve really been enjoying Parker’s two records with his most recent solo/band project – “The New Breed” and “Suite for Max Brown”.

Naturally, getting into Jeff Parker’s discography led to further discoveries – trumpeter Rob Mazurek, drummers Chad Taylor and Makaya McCraven, bassist Joshua Abrams and, most recently for me, saxophonist/keyboardist Josh Johnson and his killer recent record “Freedom Exercise”. Excitingly, both McCraven and Johnson will be playing with Parker and the New Breed band for the show streaming on June 28th.

Because of my somewhat obsessive buying, listening to, and reading about music, I likely would have eventually gotten into Jeff Parker and many of these other artists. But it’s a lot more fun to think about all of it—dozens of records, CDs and shows—originating from that one suggestion years ago. Thanks Geoff!

BUY A TICKET FOR THE JEFF PARKER STREAM 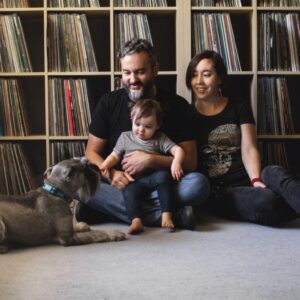 Jeff Brocklebank is a self-described music geek with a 4000+ CD/LP collection. He is also the Treasurer for the Coastal Jazz Board of Directors, and a Chartered Professional Accountant with Walsh King. You can follow along with his sonic adventures on Instagram.