While we cannot gather for a 2020 Festival this year, we can still celebrate what the TD Vancouver International Jazz Festival means to our community. Festival Tales showcases stories and memories from people who love our Festival—artists, volunteers, audiences, staff, donors, and community members.

This is a collection of those stories that are about the shows that have gone right (or wrong) over our 35 year history.

This story comes from Jen Hodge, a local bass player and friend of the festival:

The Vancouver International Jazz Festival has been hugely important to me in so many ways, from providing the opportunity to see and hear (and occasionally meet!) artists I love, to providing invaluable performance opportunities for me as a growing artist, to centralizing Vancouver’s jazz community—musicians and fans alike—for a concentrated dose of inspiration, fun, and camaraderie to kick off every summer. During my 17 years in Vancouver, I have always looked forward to Jazz Fest time like a kid looking forward to Christmas! It is a challenge to pick a single memory to write about, but since I recently dug out a photo from the 2004 festival, I figure the story of that night is as good as any!

I count myself very lucky to have seen Oscar Peterson’s concert at the Orpheum in 2004, a show that kicked off that year’s TD Vancouver Int’l Jazz Fest. Oscar is certainly one of my heroes, and it was such a thrill to hear and see his hands playing those dumbfoundingly swinging long runs in real life! In addition, Oscar had with him on bass Niels-Henning Ørsted Pedersen (NHØP), who 18-year-old-jazz-bass-student-Jen REALLY looked up to (fun fact: my spot in the bass locker at Cap back then was marked by a sign which read “JENHØP” – with thanks to Michael Rush!). After the show was over, I scurried from my balcony seat all the way down to the edge of the stage, against the wishes of the ushers I’m sure. To my delight, NHØP actually wandered back out, and I was able to get his attention. He graciously chatted with me, and helped me climb up onto the stage to have my picture taken with him. He passed away less than a year after that concert, and I am so very grateful that I was able to hear him live (with Oscar, no less!) and tell him how much I admired his bass playing and musicianship.

It was pretty early in my jazz listening when I was 23 and I saw a set of gigs planned for Expo86. I lived in Victoria but had friends working Expo86 who I could crash with. In fact all I was at Expo86 for was the music. On the second night of the festival I had tickets for Miles Davis, who had already become a huge go-to even in the early days. I had listened to, read about, and absorbed as much as I could about Miles. I had spent what was quite a bit for me back then to get great seats, in the center and 4 rows up. People were a bit put off with Miles’ style as he played a lot with his back to the audience and did not announce or speak much which I knew was standard for this part of his career. I also knew he did not sign autographs. SO when the gig ended, people rushed the stage with pens and albums/old records for an autograph, but I just put up my hand and he shook it! He did glance a few times across the crowd and we were pretty heavily into it. Not only a Jazz Fest memory, but the memory of a lifetime. Sadly I never saw Miles live again but his influence is very much with me.

Many years ago, during one of the Gastown Jazz weekends, my husband and I were sitting on the cobblestone street, on a glorious sunny afternoon, listening to the pulsing rhythms of ‘Antibalas’. The music was magic and the crowd was huge. In the midst of this, I noticed a couple of birds in the sky, then another, dipping and gliding. I didn’t know what kind of birds they were, but they were huge! I stood up to get a better view of the birds when I noticed an Indigenous man standing beside me. He watched me scanning the birds in the sky and leaned towards me and said in a gentle voice, “Those are eagles. To see them in the sky, soaring like that, on a day like this, is a blessing”. And with that, he disappeared into the crowd. Now, each time I see eagles, I remember his gentle voice and strong message. A blessing indeed!

I’m so sad that we’re unable to celebrate music collectively at the Jazz Fest this year. It feeds my soul, as I’m certain it feeds others’. We all need nourishment, particularly in times like these.

This story comes from Erik Jakobs, a veteran volunteer:

2020 would have been my 10th year volunteering with Jazz Festival. I have seen many venues come and go during these years, but the Ironworks has always been a constant, and if it were to cease being a venue, the Jazz Festival would be permanently and irrevocably altered. It was at the Ironworks, in the year 2010, that I worked my first shift as a Jazz Festival volunteer.

It was also at the Ironworks that the single most memorable thing to happen to me at a Jazz Festival occurred. The evening started out like many at the Ironworks. I walked through the door of the nondescript building into the parallel world beyond, past the band performing their soundcheck, and into the bar area at the back of the building. It was a hot day in late June, so the inside of the building was rather stuffy, but the backyard was pleasantly cool. Headed inside in time to grab a seat for the first act, then back to the bar and back yard, then back for the second act. Just after midnight, as the musicians got into their groove and I sat back to let the music take me where it would. It happened. In the rail yard behind the building, the night shift began shunting rail cars with a series of loud bangs and other mechanical noises. Then, in rapid succession, several emergency vehicles raced by, their sirens blaring. For any other show, this would have constituted an obnoxious disruption, but in that moment, the sounds outside blended with sublime perfection with the sounds coming from the stage. And then they stopped, as quickly as they had begun. The band played on and finished their set as if nothing had happened. I couldn’t tell you which band was playing that night. I don’t even remember the exact date. But for a brief time, all the sounds in my small corner of the universe converged into a single, beautiful, surreal moment. 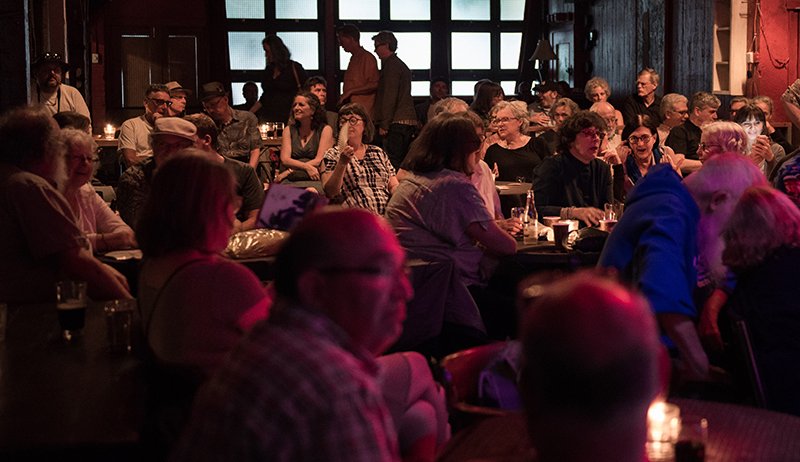 I drove from the Okanagan to the Gastown Jazz Fest several times, sometimes with my daughter or brother who is a big jazz fan, and we saw John Scofield in concert at the Commodore. We even had a picture taken with him! It was one of the best concerts I’ve been to—I’m a senior now, and while I did see a lot of the good concerts in Vancouver back in the 80s, nothing compared to this one. I hope he will perform again, and possibly inspire me for another glorious drive to Vancouver to enjoy another Jazz Fest. Have followed the jazz society for decades and enjoyed Cory Weeds, Brad Turner, other local groups affiliated with Cellar Jazz, I also saw John Pizzarelli—a bravo show! Thanks for the great memories.

Vancouver Jazz Festival 2002 was blessed with perfect warm sunny days for the Gastown weekend. Water Street was packed, with people wandering from stage to stage, listening to band after band. That year, a buzz was created because there was a ‘Mystery Cuban Band’. A sea of music lovers gathered with anticipated excitement to see what would be unveiled. Media Director of Coastal Jazz, John Orysik (aka The Doctor, Johnnie O, Frank), came on stage. All he had to do was yell “Viva Cuba, Viva” and the crowd erupted in thunderous applause.

Maraca hit the stage with smiles as wide as could be. This was Maraca’s first visit to British Columbia and to say the least – they were taken aback. Their expressions and giggling told us that they were wonderfully surprised by the reception and they would give a show to remember. With the first song, the crowd of thousands swayed in unison to Maraca’s intoxicating beat. People’s arms raised to the sky and waved from right to left in synchronicity. Being in the crowd was unifying as people thoroughly enjoyed themselves and were happy to be part of the party. An amazing Vancouver summer night, when the sun hangs in the sky a little bit longer and where people on Water Street were unwilling to leave this set early for all the money in the world, I knew I just witnessed something special. I felt honoured that I was given a small role in helping make this happen.

Discovering a “new” artist always feels special. My standout Jazz Fest discoveries are Hiromi and Ndidi O. My first time watching Hiromi attack a grand piano was stunning. All I could think was, she’s Hendrix on piano. Her no-holds-barred performance with a band matching every lick and flourish lifted the roof off the theatre. Her show had the punch only live concerts can deliver.

I was sad a lot of other festivalgoers weren’t crowding Ndidi’s rousing set elsewhere. Their loss: this lady can sing and rattle the blues like a house on fire, owning the stage with moxie and musical chops worth a bigger audience.

Harry, one of our volunteers, with just one example of how sometimes, at the Festival, you just luck out:

Norah Jones was playing at the Orpheum, and I volunteered for the Banner crew. It was totally sold out, but Boddie went into the back and found the stage manager—he had one ticket and I sat at the front row, enthralled with the show, and how lucky I was. It was a wonderful moment with wonderful music and feelings. Thank you for the magical time. 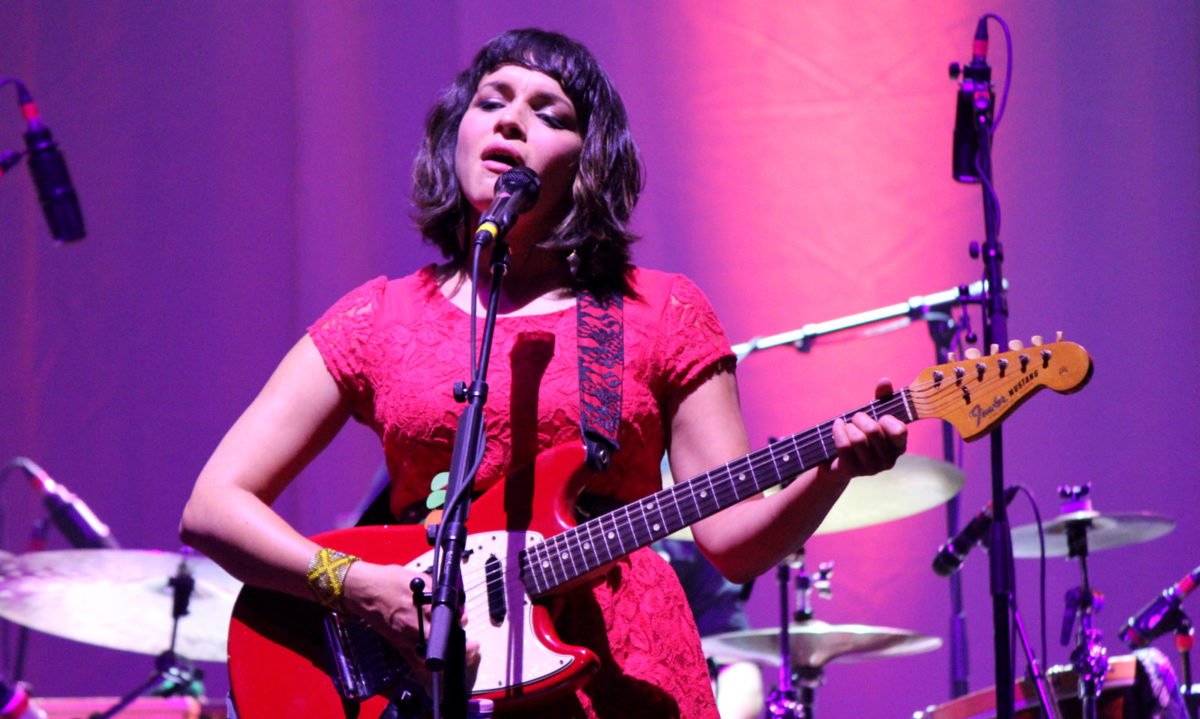