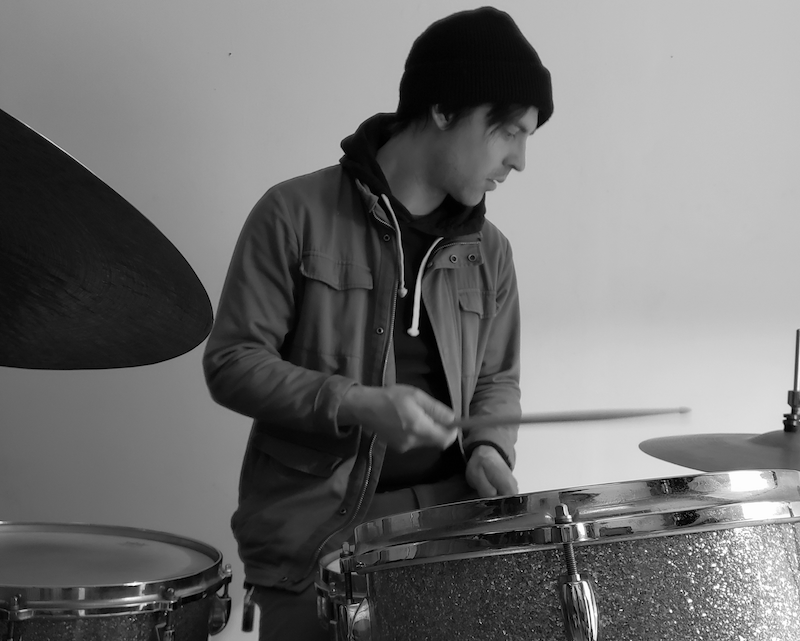 I’m a drummer, improviser, composer, vintage drum and cymbal nerd, sometimes curator, oftentimes political agitator. These days you can find me at my studio making really good pourover coffee and practicing. I think I used to do other things but that must have been a long time ago cause I forget…

I lead a jazz group of my own called Enemy Pigeon which plays my compositions, sort of in the mid 1960s post-bop vibe which is an era of music that’s been a big part of my journey. Really though as a musician I’m interested in anything that involves improvisation – Jazz and free improvised music definitely, but I also enjoy finding ways to be creative and spontaneous in highly structured settings where there’s not necessarily space for improvisation built in. I love so much different music and I’m really lucky to get to play with so many great musicians in a lot of different styles.

I’ve also been working for the last few years on developing a solo drumset performance practice that deals with a sort of complex polyrhythmic system I dreamed up. Western music has just barely scratched the surface of polyrhythm (more than one rhythm occurring simultaneously) as an improvisational tool. Musicians make time move, and we can manipulate it to make the listener feel a certain way. When we get into making the perception of time go forward at two or more speeds at the same time, there’s a huge amount of emotional impact. It’s a very moving, visceral experience, and this is something I’m trying to get a handle on and bring to everything I play whenever it serves the music.

A couple cool things came out in 2019 that I was a part of. Jazz guitarist and pianist Itamar Erez’s “Mi Alegria” (feat James Meger on bass and Francois Houle on clarinet) is a fun and eclectic record.

Only A Visitor released our third disc called “Technicolour Education” not long ago. I’ve been playing with this group for a bunch of years and this record (engineered and mixed by Dave Sikula) really captures the band (three vocalists, piano, bass and drums) in an accurate way. We call it “weird pop music.”

Simple City, a jazz-ish trio I co-lead with Arthur Smith (electric guitar) and Jeff Gammon (double bass) finally put out our first album this week. We wrote most of this music during a residency at the Banff Centre in 2018 and recorded it later that year at Afterlife Studios with the great John Rahm, who is probably the only engineer I’ll let record my drums ever again. The music is maybe somewhere along the lines of The Bad Plus or something, but even if you’re not into that you should give a listen because it sounds so good. No headphones or iso booths, just musicians in a room playing together into a billion dollars of vintage microphones going onto tape and an engineer who gets it behind the board. Dorky music nerd stuff, yeah, but as recorded music is devalued more and more, it’s nice to be reminded that the actual recording of the music can still be an inspiring and elevating experience.

Get the whole record here, and check out the in-studio live vid here:

Robyn Jacob (pianist and bandleader for Only A Visitor) is a super prolific and unique composer and everything she’s involved with is fantastic. Same for harpist and composer Elisa Thorn (she was featured on this interview series a few weeks back, check it out). The two of them teamed up as an acoustic duo called The Giving Shapes. Their debut record “Earth Leaps Up” (recorded and mixed by Chris Gestrin) came out last month and it strikes a balance that’s soothing, groovy and accessible as well as compositionally intricate and emotionally challenging. Definitely worth a few listens.