Those who know me well (and those who don’t even know me that well) know that I have some Very Strong Feelings about women in music; it was my research focus while I was in school, and it’s something I think about and talk about all the time. It is my cosmic bone to pick. Consequently, when the opportunity arose to highlight some of the women performing at the festival this year, I leapt. This post will walk through some of the recent history of women-led bands in festivals, and then shine a light on some of the phenomenal women playing our stages this summer.

In 2015, The Guardian published a series of images that took the internet by storm – it included all the UK’s major music festival posters stripped of the all-male acts. This left the posters mostly bare and deeply depressing, with only handfuls of women-led bands peppering each festival day. Soon after, Teen Vogue did the same for some prominent American festivals, and the trend went viral. 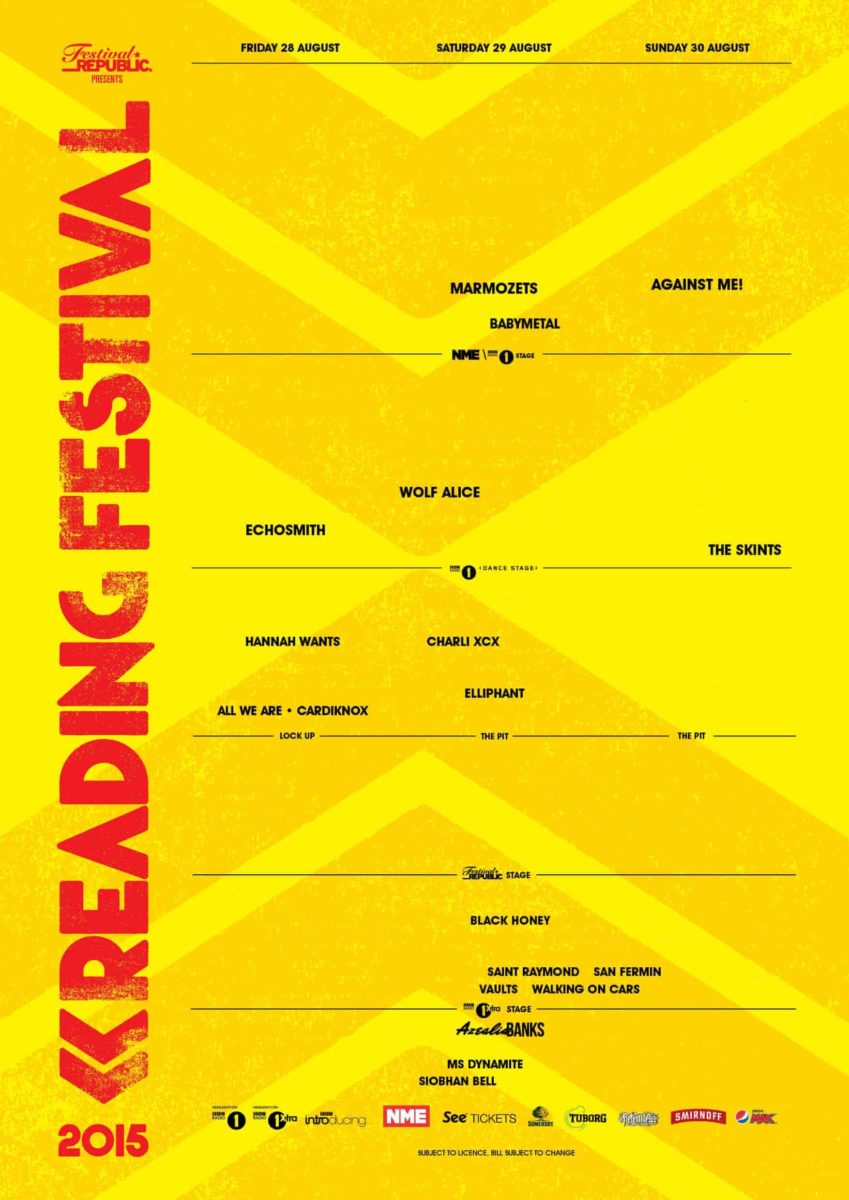 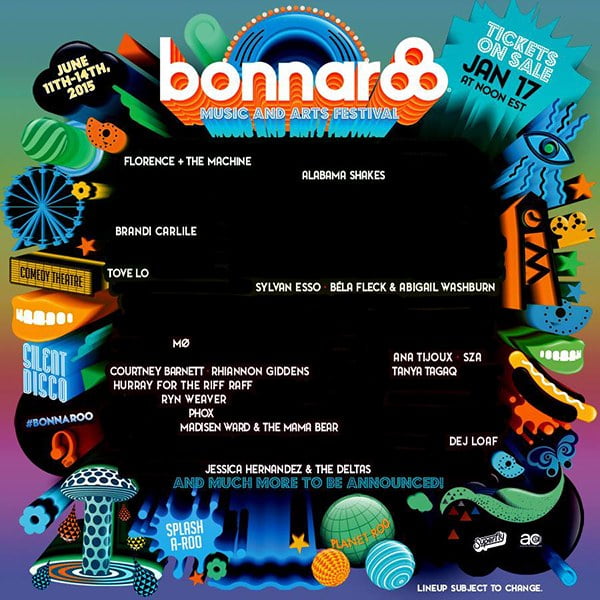 A stripped version of the 2015 Bonnaroo poster

It’s not that 2015 was a particularly bad year for it – women-led acts, let alone groups with even one woman in them, have long been in the minority at major commercial music festivals. This just seemed to be the first time that it truly caught the public’s attention, likely due to the potent combination of how brutally embarrassing the bare posters were and the rising number of voices calling for better and more diverse representation in the performing arts.

Each year since then, the annual rash of festival posters have received similar treatment, with only marginal movement in the right direction. (The Twitter account @BookMoreWomen is an excellent source for tons of examples – but be warned, it can be moderately soul-sucking).

According to a 2018 report by Pitchfork:

“Based on the 19 fests we tracked in 2017 and 2018, female representation has increased from 14 to 19 percent, while the percentage of groups with at least one female or non-binary member, held relatively steady at 11 percent. Of course, that still means that seven out of 10 artists on festival bills are men or all-male bands.”

With that context in mind, I thought I’d turn the lens inward and highlight some of the amazing women and women-led bands in our 2019 festival lineup poster. (On our own poster this year, 11 of 24 bands are led by women or have women in them, for 45% parity – a number that increases if you broaden the scope to include the entire festival).

First off, meet Kam Franklin of the Suffers: 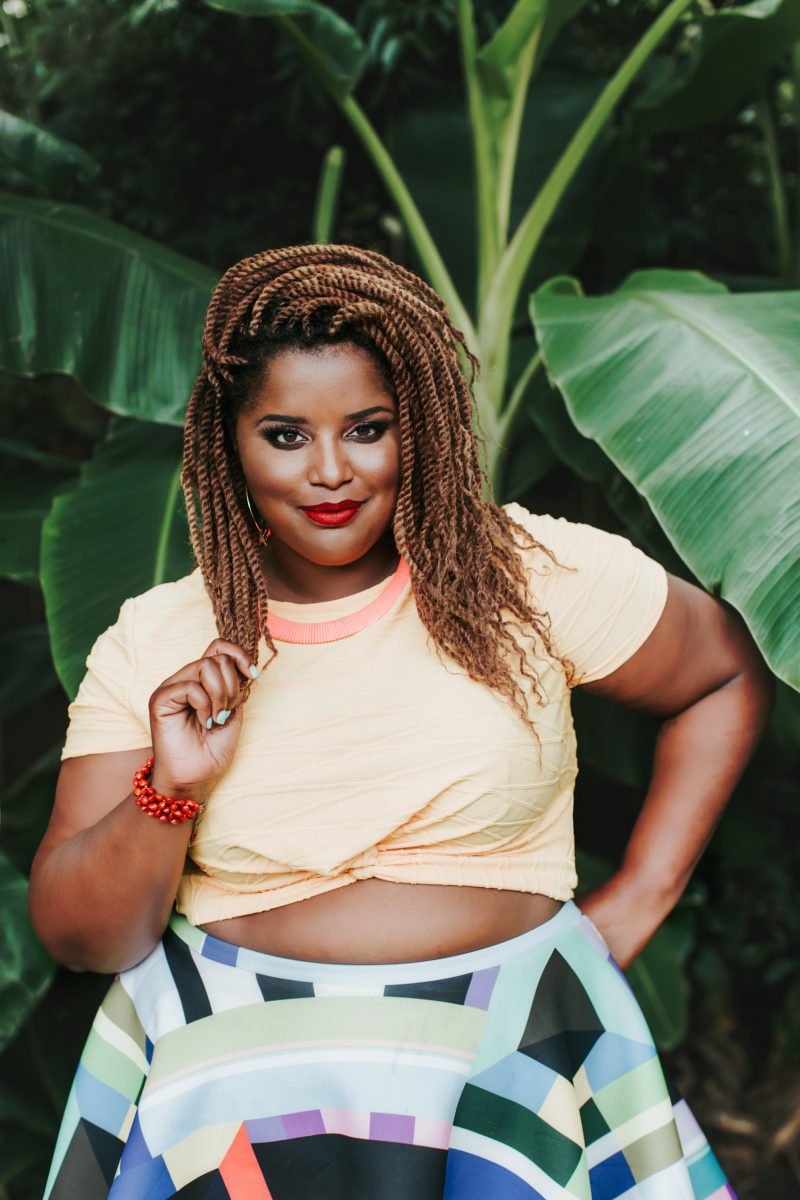 Four years ago, despite being told there were already enough voices like hers in the industry, Franklin quit her job at an investment bank to pursue music. Fast forward to now: she has built a successful career with her band The Suffers, who will spend this summer touring the US and Canada. Here is a video in which she stands on a desk, and is generally amazing:

You can catch The Suffers at the Imperial on June 24. 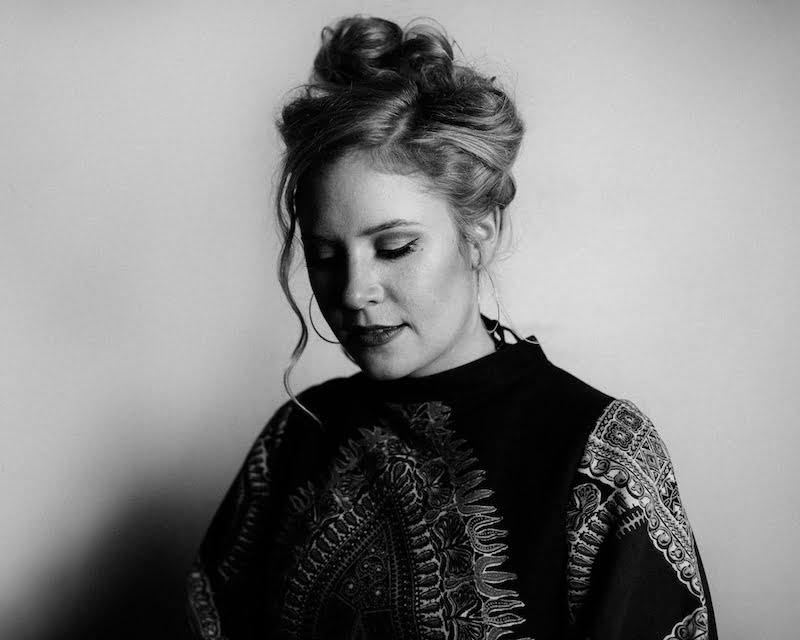 I want her shirt.

A delightful bonus: if you’re going to the Suffers show, be sure to show up early to catch the opening act by Vancouver’s own Lydia Hol, whose seven-piece band deftly combines early ‘60s soul and lush psychedelic rock to create a musical experience that won’t soon be forgotten. She’s also playing a free show at Downtown Jazz on June 23. 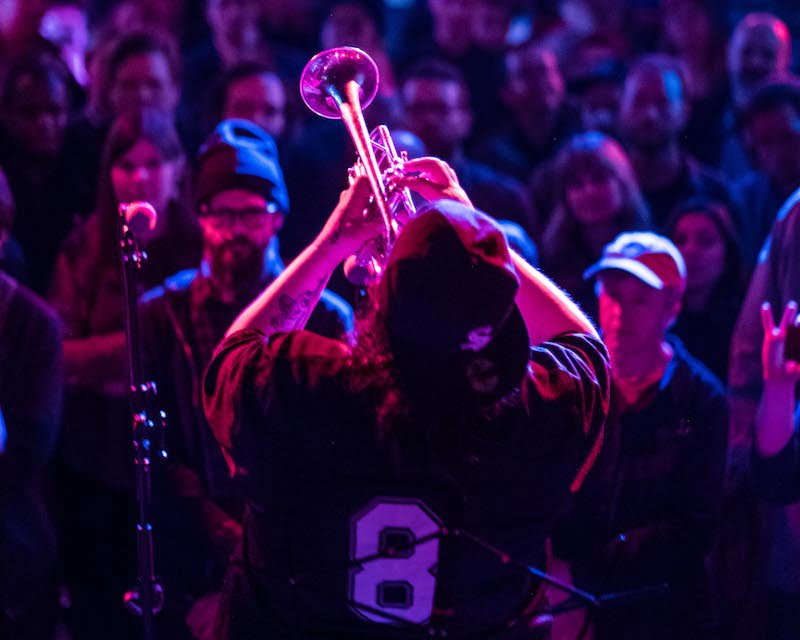 If you take a sharp left turn at Lydia Hol and wander for a while, you’ll end up bumping into Jaimie Branch. Branch – an experimental composer / trumpet player – brought us her ‘Fly or Die’ project last year and returns this year with Anteloper, a far-out electronic project that answers the question “what if tribal music was from space?” (TinyMixTapes). If you were lucky enough to be at the Fly or Die show last year (or her subsequent workshop), this will no doubt be at the top of your list.

Jaimie plays with Anteloper at the Imperial on June 29, and with Jeremy Page, Luke Stewart, Tommy Babin, and Tcheser Holmes at the Ironworks on June 30.

Each year, I feel like there is one performer I discover through working here who becomes my festival obsession. Last year it was Still Woozy, and this year it’s Begonia. Part of my job is sifting through music videos to come up with material for our compilations, and when I saw this video of her singing in glam clown makeup at a Winnipeg vintage store, I fell head over heels. She’s got this huge, incredible voice that is wildly agile – it’s full of power and tenderness and fragility all at once. Every song of hers I’ve heard has made me want to dance or cry (in the best way). She’s performing at Downtown Jazz on Saturday the 22nd.

Singing in three languages, Montreal-based Inuk performer Elisapie Isaac puts on a truly spellbinding performance. This video for ‘Arnaq’, the first song from her latest record, opens with the statement ‘I am a woman, I give you life, I give you love”. The statement is a forecast of the strength and dexterity that she shows throughout the record (and is conveniently extremely relevant to this blog post).

One of Guitar World’s “10 Female Guitarists You Should Know”, Ava Mendoza is a versatile musical force who is as at home covering “Good Night Irene” as she is creating white-hot noise. We’re lucky to have her playing two shows (one solo, one with her group Unnatural Ways) and giving a free workshop, so there’s literally no excuse for you not to see her in some capacity.

(For reference, here is Mendoza covering “Good Night Irene” – a video I am obsessed with and have been sending to everyone I know since her shows got confirmed)

You can see Ava Mendoza at the China Cloud (solo) on June 26 and with Unnatural Ways at the Imperial on June 27. She will also be giving a workshop on June 26 at Tom Lee.

Though she’s based in Toronto, Laila Biali is originally from Vancouver, so we can still lay claim to her as a hometown hero. She took home this year’s JUNO for “Vocal Jazz Album of the Year”, an unsurprising achievement in her steady rise toward becoming one of Canada’s favourite jazz darlings. If you’re into the more straight-ahead scene, Laila Biali will very likely be up your alley. She also has hands-down the best photos of anyone we’re presenting this year: 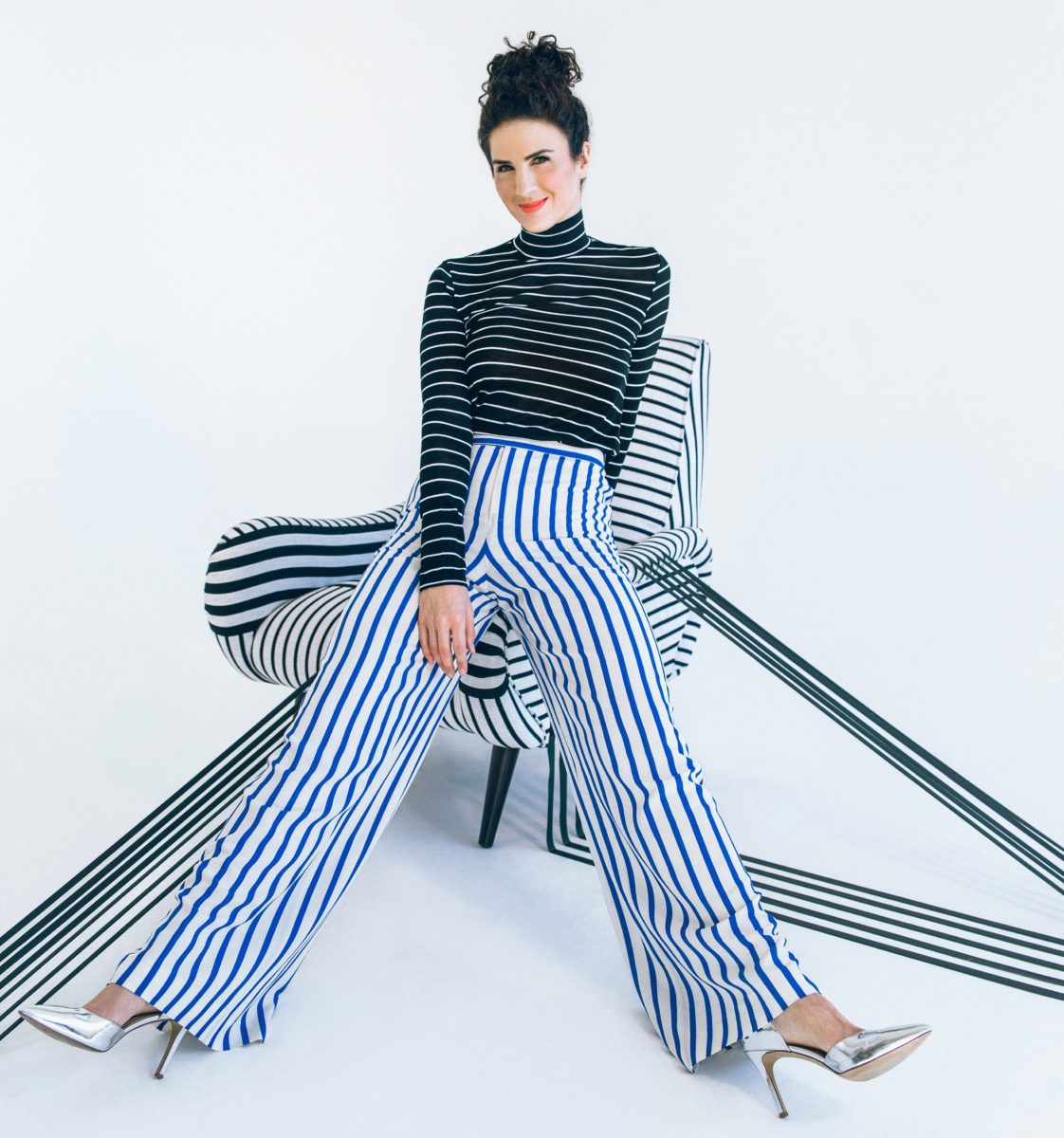 I mean, look at those pants.

Dálava (Julia Ulehla and Aram Bajakian) is one of my personal must-sees for the festival. I met Julia when I was studying music at UBC and she was a graduate student in the ethnomusicology program, and I don’t know if I’ve ever met anyone who is quite as centered in the middle of the venn diagram of deeply kind people and totally captivating performers. If you don’t know the story, Dálava is a contemporary homage to traditional Czech folksong that uses melodies transcribed over 100 years ago by Julia’s great-grandfather. The result is both strikingly modern and firmly rooted in history and tradition, and their shows are enthralling every single time. 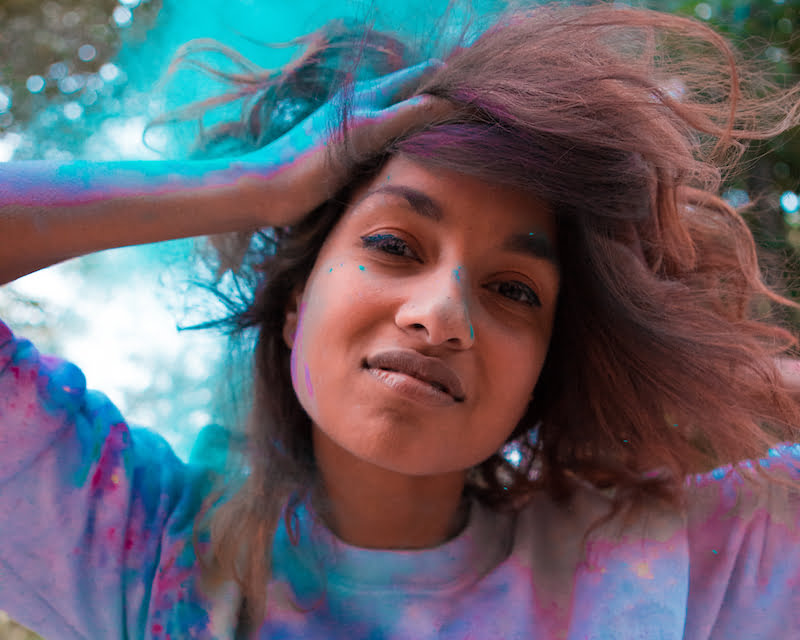 Tara Kannangara is a high point for this year’s Frankie’s Jazz Club lineup. Because I’m a trumpet player and a woman, I’ll admit I have a soft spot for other female trumpet players (we’re few and far between). But regardless of gender, there’s no preferential treatment here – Kannangara has a bright, clear tone and a strong set of chops that would earn her a spot on any trumpet player’s list of shows to catch. Add her stunning voice and fluid melodies to the mix and this performance is a guaranteed knockout.

You can catch Tara Kannangara at Frankie’s on June 24th. 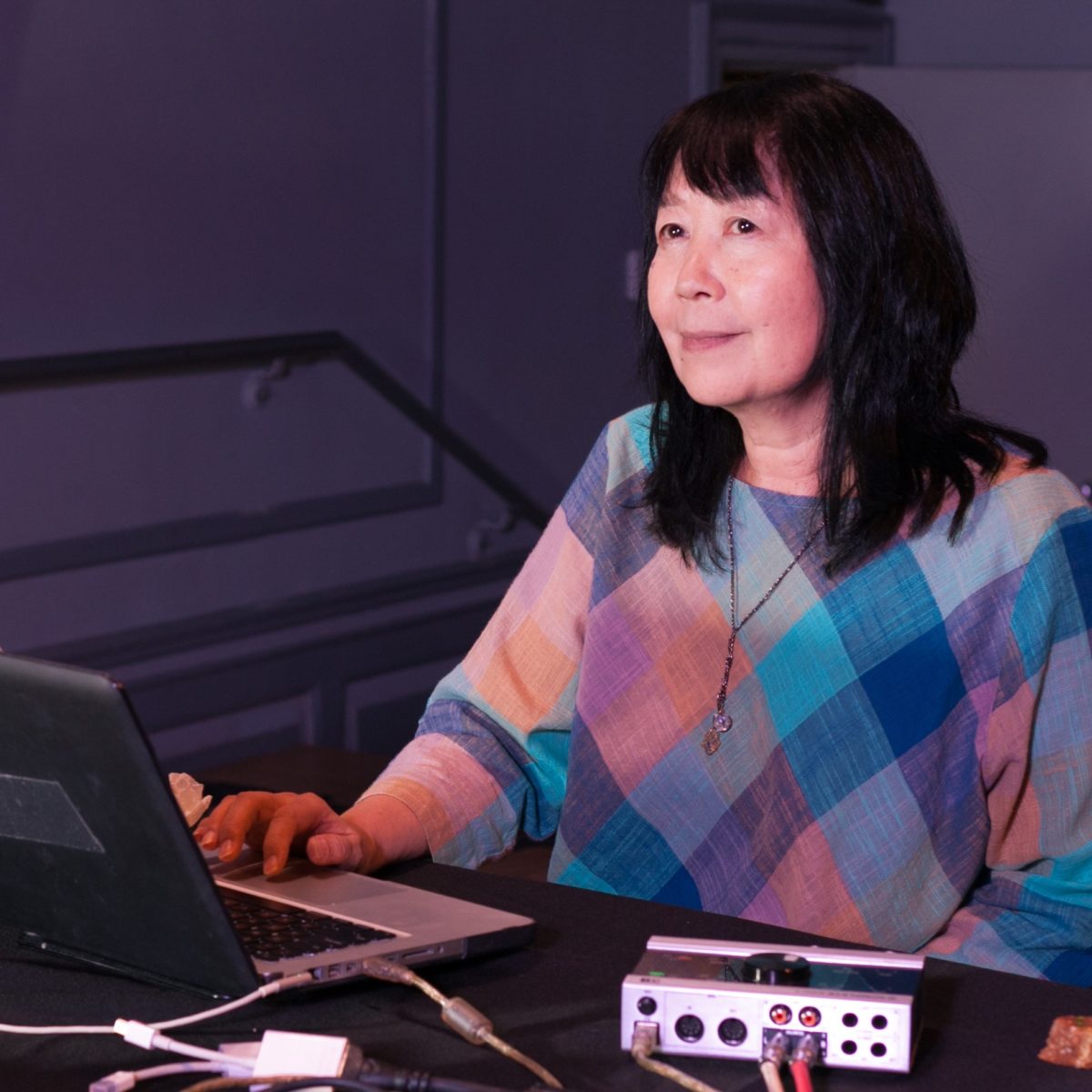 Ikue Mori is so cool. Originally from Tokyo, she emigrated to New York in ’77 and has been making beautiful noise ever since. She’s been at the forefront of laptop and electronic improvisation for as long as it has been a thing, and her musical voice and influence are so powerful that the Chicago Reader called her “one of the most singular musicians in modern music history”.

Ikue Mori plays the Ironworks with Jim Black on June 24.

Thank you for reading and listening! If learning about gender inequity in festivals (and all the incredible women who are playing our own) has got you fired up, here is some excellent further reading:

And lastly, just because, here is the miraculous video that is this post’s namesake: